Transparent projection screen: what is it and when is it needed? 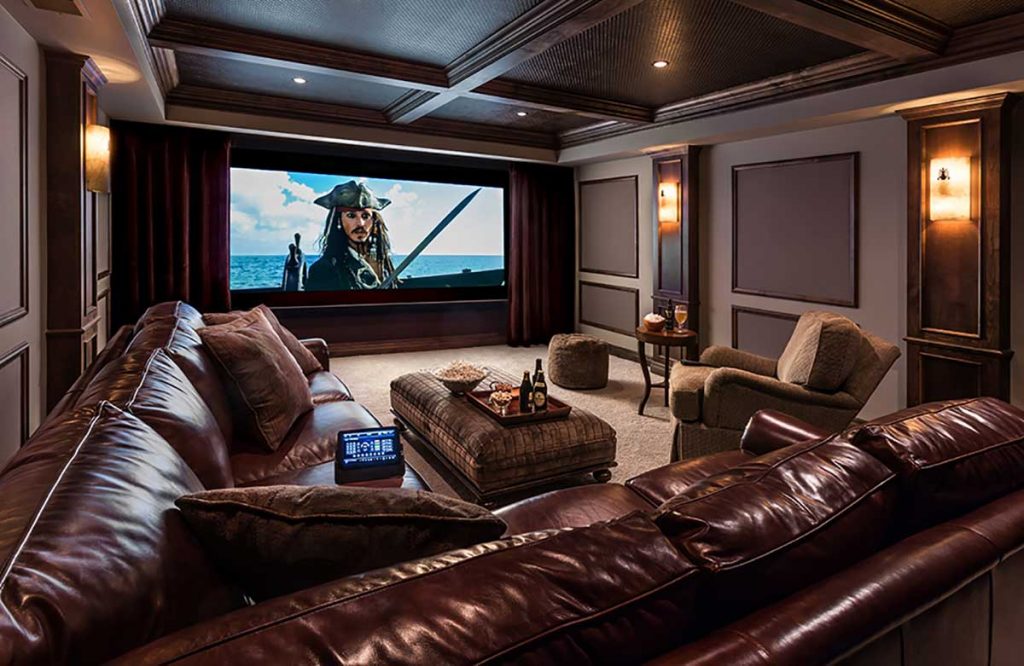 In some types of home theater, speakers are hidden from view. To achieve the purpose, however, special technical arrangements and the use of sound-transparent sheets, that is, projection sheets capable of letting sound pass through without obstructing it. There are different types, with different performance and costs: for example, perforated, micro-perforated or carbon fiber. Here is everything you need to know about the subject.

What is a Phono-Transparent Screen

A sound-transparent (or “acoustically transparent”) screen is a screen made of a special woven material that blocks the passage of light without obstructing or distorting sound. It turns out to be essential when you want to place speakers behind the screen, so that they are hidden from view, or when there is not physically enough space to place them in view. This produces several benefits.

First, the room is much neater, with a clean, minimalist design. By eliminating the side speakers, all useful space can be reclaimed by installing a larger projection screen. Finally, this configuration gives the distinct impression that the actors’ voices and sound effects come directly from the image itself.

The result is greater realism and a significantly higher level of immersiveness: it really feels like being in front of the set. The home theater room is more beautiful and sophisticated, and the screen can completely fill the wall. And by the way, the quality of this type of screen is usually higher than standard counterparts.

Typically, music, dialogue, and acoustic effects are played from the front center, left, and right front channel speakers. If the sound comes from behind the screen, however, the final effect makes the sounds feel as if they were generated directly from the actors’ actions and mouths. It may seem like a small thing to read, but we assure you that being swept away by the sound stream from a soundcloth on a 150-inch screen is truly magical!

It is something you can only understand after you have experienced it at least once in your life. And this is nothing.

With a standard screen, it is necessary to study the installation of the speakers so as to best target all viewers. But calculating the optimal position is very complex and must take into account many variables. Placing the speakers behind the screen, on the other hand, simplifies the work so much, speeds up the project and, above all, always guarantees the best possible result in terms of sound diffusion.

It also allows you to focus on the technical specifications rather than the aesthetic aspects. That is why the best home theaters are always based on hidden speakers.

Although the real treat, in our opinion, is another. By eliminating the speakers on either side of the screen, you can take advantage of all the usable space and thus achieve larger screen sizes. Yes, if you want, you can literally cover an entire wall!

Perforated screens consist of a very strong PVC sheet studded with a series of holes with a diameter of 0.3 mm or less. In some cases, when the diameter is much smaller, they are referred to as micro-perforated sheets.

These perforations are what allows sound to penetrate the screen while blocking out much of the light; this peculiarity prevents the image from reflecting from the wall behind and reaching the viewer’s eyes through the perforations.

Up close it is possible to make out the perforations, but it only takes 20-30 centimeters away for the human eye to no longer perceive them. And as technology advances, this distance gets smaller and smaller: the more minute the holes, in fact, the better the final effect will be; and this is crucial with modern high-resolution projectors.

In place of a single perforated surface, a woven screen is made much like a fabric. This type of cloth has natural variations in thickness and pattern, which makes it more effective in reducing alignment with the projector’s pixels and consequently reducing the typical drawbacks of perforated screens. Such as, for example, the dreaded Moiré effect, which we will discuss in the next section.

In general, thanks to a weave characterized by a very precise angle, a woven fabric tends to make sound flow with less difficulty than a perforated screen. And while it is true that some frequencies tend to be absorbed by the screen, it can still be solved by adjusting the tone controls and basic equalization of the speakers. In short, it’s never really a problem.

Moiré effect refers to the lines and patterns sometimes seen on the projection screen. It can manifest as a horizontal, vertical or diagonal line caused by an imperfection in the texture of the material. If the projector image is at the wrong angle or aligns with the hole pattern, it can generate this inconvenience.

It is an annoying video artifact that distracts from the projected content and forces the eyes to make an effort. It is a problem is related to resolution and, depending on the case, may depend on two possible factors:

The projection screen is of poor quality and has too thick a texture, perforations that are too large, or an uneven texture.

Moiré occurs when micro-perforations in the screen align or overlap with the pixels of the projected film, merging into long lines clearly visible on the screen. Typically, the defect is more likely to occur with perforated screens than with woven screens. This is because the projector image is more likely to find random alignments with the structure of the holes.

This phenomenon becomes more prevalent with 1080p and especially 4K HD projectors because of the greater amount of lines in the screen. But choosing perforated -or better yet woven- screens of high quality eliminates the problem at its root.

As mentioned, perforated screens have a lattice of small holes that cover up to 10 percent of the area of the PVC sheet. Despite their capillarity, however, they offer sound waves a very small portion of space to pass through. It is inevitable, therefore, that damping will occur.

Added to this is another problem. Much of the sound at certain frequencies tends to bounce off the screen instead of through it. This implies the need to skillfully set equalization and other settings to achieve the best possible acoustic results.

How to Choose It

The market is flooded with different products and brands. But choosing a suitable projection screen for your facility is not easy. The questions users usually ask are:

What ratio should the projector screen have?

What size to choose for the screen?

How much gain to set?

And so on. Using an acoustically transparent screen is a great way to take your home theater experience to the next level.